Though I miraculously find myself in a happy and healthy relationship, I can't help but indulge in the influx of heartbreak bangers that seem to be rapidly proliferating these days. From hyperpop's rise to the Olivia Rodrigo-core indie artists that dominate TikTok, my well of bops inspired by love's misery never runs dry, and it's clear that I'm not alone. Among these celebrated tracks, however, there's one that stands alone: Araya and DJ_Dave's "Kiss on the Train," a tragically beautiful indie-pop track that effortlessly captures the melancholy of a romance fated to end.

If this is your first introduction to either artist then you're in for a treat, as "Kiss on the Train" is a heavy dose of futuristic electro-pop bliss from two of the scene's most promising upcoming acts. Pulled from his sophomore album Ethos,  "Kiss on the Train" highlights Araya's signature sound - experimental indie-pop crafted with both rare sincerity and an uncommon sageness for someone his age.

DJ_Dave lends her own divine providence to their holy collaboration, and on their Fenn Paider-directed visual, Araya and DJ_Dave perform the dejected banger as the latter live-codes the mix as the track progresses. A pioneer in bringing algorave to the pop frontier, DJ_Dave wields sonic pi just as effectively as she writes music, manipulating loops and tones to provide listeners electronic music that feels inspired by techno's fabled past and iconoclastic future.

"Kiss on the Train" is one of many painstakingly-polished tracks from Araya's latest record Ethos, and with more visuals and tracks hopefully on the way, this certainly won't be the last we hear from neither the Thai-Chilean singer or DJ_Dave.

Watch the live coded  "Kiss on the Train" video below:

June 29, 2022 Is there anything more cathartic than a biting pop-punk song?
Author: Maxamillion Polo
pop
pop punk
claire rosinkranz
im too pretty for this 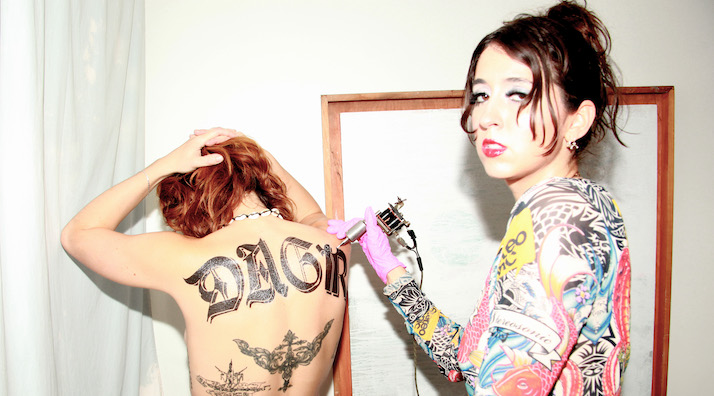