Outside Lands 2019: 10 Ones to Catch (Who Aren't Twenty One Pilots or Paul Simon)

Outside Lands is one of the few music festivals that can truly claim to have it all. After all, where else can you catch Paul Simon and Blink-182, sip on craft beer, eat gourmet food, enjoy a curated cannabis experience, and watch Tony Danza deliver a comedy set backed by a full band? Well, as of now, 2019's Outside Lands is quite possibly the only place on the planet that checks all the boxes.

Set to take over Golden Gate Park in San Francisco, CA from August 9 - 11 for another weekend for the ages, Outside Lands features so much more to do and see than just visit "Grass Lands" or catch Twenty One Pilots for the seventh time (although truth be told, we will likely be up against the rails). As a matter of fact, some of the best not-to-miss acts are hidden in the fine print, which is exactly why we hand-combed the 2019 Outside Lands lineup for ten acts you need to catch.

Cautious Clay  is poised to have quite the tail end of the year. Closing out 2019 with a series of festival appearances and a  Ones To Watch - presented tour, the acclaimed Brooklyn artist is preparing to take his next step towards inevitable R&B stardom. Blending elements of R&B, hip-hop and experimental indie with an impeccable feel for musicality, Cautious Clay's music exists contrary to its creator's namesake. This is an adventurous foray into the world of R&B and one you surely do not want to miss out on catching live.

If there is one thing  Still Woozy's music has, it is an inescapable groove. Combining a leftfield blend of acoustic and electronic elements, the otherworldly project of Sven Gamsky is nothing short of captivating. To attempt to put it in words - imagine the serene calm of drifting atop a parade of clouds, only for that calm to give way to a sun-soaked, dance-inducing indie jam session. And if you needed any more reason to catch Still Woozy at Outside Lands, this set will essentially be a hometown play for the Oakland native, so you know he will be bringing his A-game.

AURORA's music is the very definition of beautifully haunting. The Norwegian native exists in a dark pop space formed from the threads of delicate electronic textures, sparse production, and flawless, emotionally-charged vocals. It is a musical world that while existing in our own seems as if it could be the sonic interpretation of a fairytale come to life. And there is no better place to catch AURORA and her transfixing sonics live than in the middle of Golden Gate Park with the fog rolling in.

We may more often than not champion  The Marà­as  as Los Angeles' sexiest band, but maybe that is doing the psychedelic-soul meets indie rock meets dream pop outfit a grand disservice. After all, it is not as if the at-times Spanish and at-times English lyrics are not mesmerizing listeners all across the world. Yet to release their long-awaited debut album, The Marà­as has managed to keep fans the world over under their spell with a pair of EPs we have had on repeat since they first graced our ears. This is a band you do not want to miss.

Masego  is here to put a sultry-smooth spin on R&B, and we are here for it. A self-taught saxophonist, pianist, drummer, singer, rapper, producer, and plenty else, there is no questioning Masego's work ethic. It is a drive that has led the rapidly rising artist to not only cross the globe multiple times, playing to sold-out crowds across the world, but drop a genre-bending gem of a debut album as well.  Lady Lady, the album, in question sees Masego ready to take his self-coined traphouse jazz to newfound heights.

Wallows  may be a band that is more than a decade in the making, but their exhilarating brand of indie rock feels remarkably fresh. The childhood project of lifelong friends Braeden Lemasters, Dylan Minnette, and Cole Preston, Wallows' debut album  Nothing Happens  arrived earlier this year as an adrenaline-charged reflection of losing one's innocence in the inevitable wake of transitioning to adulthood. The phenomenal project was well worth the wait and is surely best experienced live - potentially in a gentle mosh pit,

First finding her start at the age of 13 as a contestant on season two of The X Factor, the past few years have seen Bea Miller launch past her initial claim to fame to stand as a pop-R&B force to be reckoned with. No longer a child star, Miller's 2018 album  Aurora  illustrated her potential to grow into a bonafide star. It is a promise she has only continued to deliver on, with the last year seeing Miller working towards her highly-anticipated new album, including linking up with R&B star 6LACK to deliver quite the noteworthy collaboration.

Better Oblivion Community Center combines every emo kid's dream with one of indie pop's most enthralling and commanding voices. The joint project of Bright Eyes' frontman Conor Oberst and indie pop phenom  Phoebe Bridgers, Better Oblivion Community Center appeared seemingly out of nowhere to deliver one of the most awe-inspiring projects of the year. Rich with all the emotional depth anyone could expect from either an Oberst or Bridgers' project, this is a set you will surely not want to miss out on.

There is a haunting magic to Weyes Blood's craft. Its flows out like an invisible thread, connecting her initial far-off folk and soft rock musings to her more recent ventures through lush atmospheric textures. And no matter where you may find yourself in her catalog, there is an enchanting element to it all, pulling you further and further into the spellbinding world of Weyes Blood. With the release of her critically-acclaimed 2019 album  Titanic Rising, Weyes Blood is set to deliver a hypnotic Outside Lands set quite like no other.

Encapsulating the revered soundscape of '90s shoegaze and ultramodern incandescent R&B, MorMor arrives as a welcomed enigma. The Toronto artist's perfectly indescribable music moves through sonic space with a restrained calm, hinting at the unfathomable emotional and existential depths that hide just below MorMor's nearly-hushed vocals. It is a transfixing musical gift that MorMor wields with such a deft hand that it never ceases to amaze us no matter how many times we hear it. 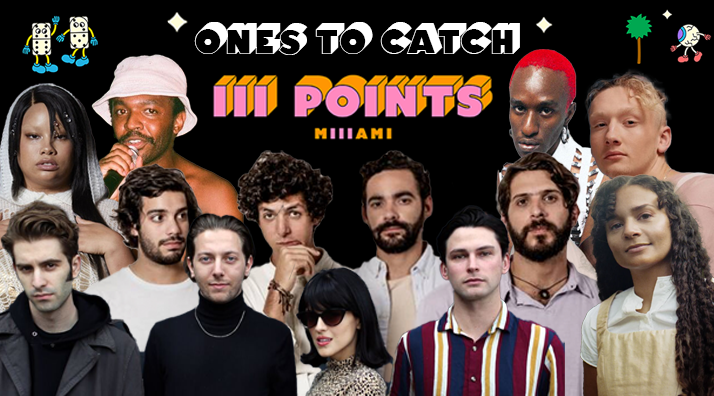 August 3, 2022 You do not want to miss out on these nine up-and-coming stars.
Author: Maxamillion Polo
kennyhoopla
ones to catch
dayglow
inner wave
faye webster
outside lands
glaive
jelani aryeh
the blssm
the linda lindas
salem ilesse