Juno Is, From Drumming in Bands to Embracing Full Creative Control [Q&A]

The solo project of Mackenzie Hollebon, Juno Is serves dreamy, mysterious, lush, and multilayered psych-pop. One of Mac's all-time favourite albums is MGMT's Oracular Spectacular, which informs the luminescent sonic universe of Juno Is.

In 2020, Juno Is released the captivating, dynamically diverse Creature Of Habit EP, following this up with two singles in 2021, the shimmering, nostalgic "Floating" and "So Hazy," where upbeat vibes and punchy percussive flourishes offset darker lyrical content. As well as ambient, guitar-driven tunes, Juno Is' growing discography also includes party-starting jams written specifically to mix up the vibe and get the crowd moving during live shows.

In a live setting, Juno Is morphs into an expansive five-piece band featuring "lots of loud guitars and dreamy vocals," with this outfit a regular fixture on New Zealand's touring circuit. And while gigs have been temporarily put on hold so that Mac can focus on her next musical milestone, the eagerly anticipated full-length debut from Juno Is, titled Zoom Zoom,  Live Nation and Vodafone's Ones To Watch was able to catch up with the artist for an intimate performance from her New Zealand home.

When Juno Is creator Mackenzie Hollebon Zooms in - from her home studio in Dunedin, New Zealand - she discusses her need for autonomous creativity, drawing inspiration from King Krule, and how Omnichord helped to define the Juno Is sound.

Ones To Watch: Tell us about the musical scene in Dunedin, New Zealand, where you hail from?

Juno Is: It's an awesome scene to get into when you're starting out with music, you know that people will show up and party.

Looking back on all of the shows that you've performed as Juno Is so far, what would be a standout?

Being a drummer and not being used to singing in front of people before, I found performing with this project really intimidating at first. But I'm used to it now and not being able to perform for ages, because of COVID, reminded me that it's such a privilege!

Probably my favourite show so far was opening for my friend Kane Strang. It was quite recent. It was a really special show because my whole family was there and he's just released this album [Happy To Perform], which everyone is super-proud of. I'm pretty lucky with my friends and family, they love to get up and dance, sing and embrace my music, and it's really cool to just have that support.

When did you first start playing music and what attracted you to the drums as an instrument?

I started playing drums when I was 11. My dad bought a drum kit, put it in the garage and he was like, "Oh, if you're interested, you should definitely have a go." The drum kit was actually for him, 'cause he played drums as a kid and wanted to get back into it as a hobby and have fun. Then one day he just gave me his iPod and said, "Oh, just play along to the songs," and it was, like, Led Zeppelin, Red Hot Chili Peppers - the rock bands - and I spent quite a lot of time doing that and then just fell in love with it and didn't stop after that. I got lots of lessons and joined lots of bands. It's been a fun journey.

What made you want to stop drumming in bands and explore your own individual musical identity?

I feel like, because I'm such an introverted person, it definitely came to points where I'd clash with people when I was drumming in bands, and I just felt like I needed full independence to fully be satisfied with my creativity. I've always dabbled in recording demos at home, but I never took it seriously until a couple of years ago when I decided to go into a studio and record with someone else and actually release something as a project.

Your debut EP, 2020's  Creature Of Habit, which came out is incredible. It sounds like its own little sonic universe. Can you tell us a bit more about making this EP?

Creature Of Habit was recorded in 2019, so a couple of years ago now. I'd written a lot of ambient, guitar-y songs for the EP. They were still upbeat, but I was like, "I definitely need a song in here that people will boogie to live." So I wrote "Mr Happy"... it's not really a musical song as such; it's a vibe song, a party song. The EP was the first lot of music I've ever released as a solo artist.

Working with producer Steven Marr, did he share any production tricks with you? What did he bring to the table?

He actually introduced an instrument called an Omnichord to my live sound. The Gorillaz use it quite often and Steven owned the one that I now have. He kind of just pulled it out and he was like, "Oh, this will sound really good on this track. I'm just gonna play it and if you like it you can keep it." I loved it and decided to purchase it off him. And now I just use it all the time and I feel like it adds that dreamy kind of element to my sound. It's just fun experimenting.

What's your usual songwriting process like? Do you set aside specific days or blocks of time for songwriting sessions and recording demos, or do you prefer to wait until inspiration strikes?

I definitely feel it out. I don't want to force my creativity! When it comes to songwriting, I go song by song. I'm trying to keep it interesting and let each song have its own personality; they're already so different, each song has its own feel and kind of dynamic structure within it. It's quite a fun process. I'm trying not to overthink a song when I write it. So if I start writing a song and I kind of lose interest, or it doesn't feel right, I stop writing it and I'll just start something else. I don't wanna put any pressure on my creativity otherwise it will just become a bit boring. I've just started writing a song that's got, like, a classical guitar on it. And I'm gonna get my friend over this afternoon to play some sax on it, which I've never done before.

A lot of people tend to associate saxophone with cheesy '80s solos à  la Kenny G. Can you give us an example of an artist that you think uses saxophone in a fresh, exciting way?

I kind of reference King Krule. I really like the sax that he has in his band; I feel like that's such a nice sound. So if I was going to get inspiration from anything, I feel I could get inspiration from the sax in his band. I'm wanting to use [sax] as a layering instrument, for texture. For example, with the song I'm doing at the moment I just want it to slowly build and thicken throughout the track and then when it gets to the end of the track I can have, like, a chill sax solo - not a cheesy solo, just similar to what I'm doing with my lead guitar. So it's like this feeling that you get from it - that it's built-up - and then you finally have this big solo at the end and it's like, "Woah!" [laughs]

In the Juno Is film clips and press shots, you often wear gorgeous vintage dresses. Did you have a visual aesthetic in mind for this project from the get-go?

Not from the get-go. I feel like when I started I definitely wanted to have the '70s-type vibe, you know, the clothes and the film photography and the music videos being shot on Super 8 - all that sort of stuff.

No [laughs]. But I think it's so worth waiting and spending the money on that, 'cause - especially when you're filming with Super 8 and 16mm - it's not like you can redo the same take again, it's pretty much a one-take wonder; you just have to get ready for the shot, take it and that's it. That's the beauty of it, 'cause there's mistakes within that, but you've just gotta embrace them and let it happen.

So who does the beautiful white horse that stars in the "Floating" clip belong to?

It's my little brother's horse. I think its name is Beau. That was all filmed up around my parents' place a couple of hours central from where I live now, in Dunedin. It was quite fun being around home.

Are you currently in the process of recording the debut Juno Is album?

I'm actually going down to the studio this weekend to work on some new material! I'm basically just recording two songs at a time - as I write them - just so I don't get overwhelmed and I can focus on the production and really spend time on them. I don't want to rush the album at all. It's been a big dream of mine, my whole musical career, and I want to do it right.

I recently discovered an artist called Midnight Sister, their songs are so different, and they make you feel really good. It's really inspirational music; quite groovy but also emotive. 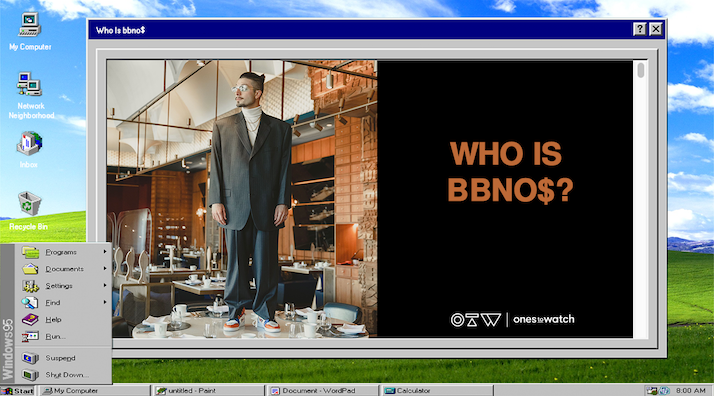 May 25, 2022 Meet the viral hitmaker who is most definitely not a virgin.
Author: Ruby Scott
pop
interview
rap
hip hop
bbno$
who is
who is bbno$? 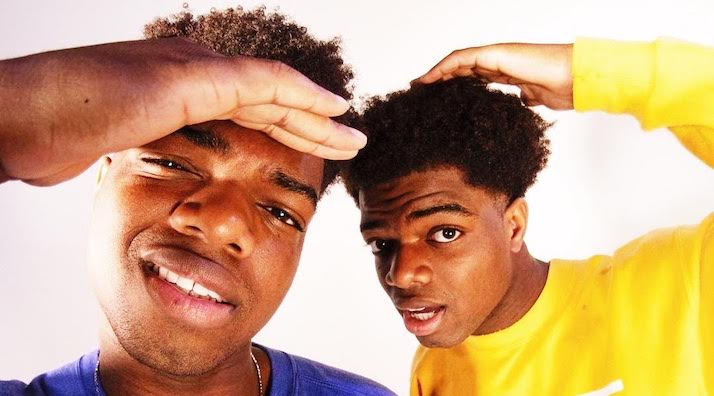