Joy Again is the kind of band that makes music that you can both dance to and have an existential crisis to. Their vast soundscapes that switch from song to song make their discography easy to dip into no matter what mood you're in. They don't want their music to be predictable, and it's safe to say it's not. Their constantly elevating sound is soaked in a plethora of emotions, originating with hazy garage rock anthems that keep you afloat in a swampy pool of murky sound and, more recently, diving into indie pop sounds that make it hard to keep still.

The Philadelphia-based group is made up of singer/guitarist Sachi DiSerafino, singer/guitarist Arthur Shea, bassist Blaise O'Brien, keyboardist Tyndall, and drummer Will Butera. The group tends to draw inspiration for their own sound from other Philadelphia musicians. They met one another at a boogie boarding competition that was hosted by rapper Jay-Z in New Jersey, and came together in an online chat room on a pro-longboarding forum. The rest is history.

In 2014 Joy Again jumped into their debut album,  Forever, which was soaked in glorious blown-out DIY rock landscapes. You can stream the album in length, heavy with a total of 30 songs... I can not make this up. The album, which runs for over an hour, showcases the group's curiosity of sound and experimentation with a lot of different emotions and levels of instrumentation. There are some instrumental tracks, a few songs with limited vocals, and then some songs like "Another Song About Ghosts" and "Winter Snakes," which would later be remade and released on their self-titled EP. Tracks like "Sorry You Didn't Get to Kiss That Boy You Wanted to Kiss" and "Dead Dog" were windows into the sound they would later dive deeper into - a lighter indie-rock spirit with whopping guitar grooves.

They released the 2015 single, "Looking Out for You," which happens to be the band's most listened to song on Spotify, and the 2016 single, "How You Feel." Both tracks are fueled with DIY-indie rock energy, featuring stand-out vocals and upbeat drums. The vocals in these two tracks, and what would help differentiate Joy Again from other bands, is the specific twang that pokes into you. The unique vocals have a way of elevating the sound in a tickling, cynical way, and it draws listeners in.

In 2017, the band released a self-titled EP that consisted of five, slower tracks with heavier, twisty garage rock songs more reminiscent of bands like Crumb. The elevated wooziness Joy Again drifts in showcases an expansion of the band's sound compared to their past work with off-kilter synth sounds. The project is brightened with jittery numbers like "Another Song About Ghosts" and "Sungazing," then stops you in your tracks with the last two songs "Winter Snakes" and "Necromancer." The vocals on "Winter Snakes" emit feelings of being content while simultaneously making you feel uneasy. The reverberated vocals dip in and out of a stand-out bass-line and woozy guitar.

"Necromancer" is incomparable to any track the band has released. It embodies the quiet feeling post-getting the air knocked out of you. A lone, crackling acoustic guitar strums through gentle, sing-songy lo-fi vocals. It's one of those songs that'll jolt you to a halt the first time, or quite possibly every time, you listen to it.  "Necromancer" captures an unrestful feeling of isolation and sadness that's unmatched, and remains one of the band's most popular songs on Spotify (and is my personal favorite).

Joy Again released two singles in 2017 with the spacey "On A Farm" and upbeat indie-rock "Kim." After a bit of a pause in 2018, the group returned with two new singles in 2019, "Country Song" and "Couldn't." Their latest is a step in the right direction, with higher production quality, utilizing more developed electronic sounds on both songs compared to past ones. They have more developed indie pop/rock sound, utilizing their strengths and capturing feel-good energy.

Joy Again's sound has altered immensely over time, and we're excited to see what the group has in store for the future. Their  Piano EP  will be released on Aug. 7, and they have two live performance, one in Los Angeles and the other in NYC, set for early September. 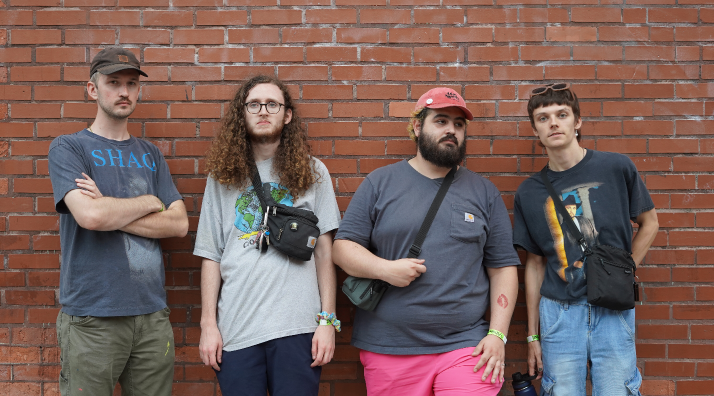