Mimoza Opens up About Her Songwriting Collaboration on "Kings & Queens," Her Life Growing up, and New Single [Q&A]

Commanding pop artist Mimoza is recognized by her fiery, fervent offerings. Co-writer on the chart-topping single "Kings & Queens" by Ava Max, she is known for her inspiring anthems and this one is no different. Spending years writing for other artists, she has now taken time to focus on her own music. With her emotive debut single "Big Girls Don't Cry," her heartfelt hit "Love for Days" and newest release "Young Queen," she has proven that she is a fierce force in the pop scene.

The multi-faceted singer's cinematic songs shine with a vast vibrancy and alluring warmth. Her strong self-assurance and impeccable poise make for elevated releases that soar to success. Showcasing a rich vocal tone and honest lyricism, you cannot help but be hooked by her bold bangers. Each one of Mimoza’s dynamic tunes takes you down a deep soul-stirring journey.

Born in Kosovo, Mimoza and her family fled the war-torn country, seeking refuge in Sweden. Spending much of her teenage years in Germany, she developed a deep love for songwriting. Influenced by musical greats like Dua Lipa and Rita Ora, Mimoza admires the Albanian pop talents of today, aiming to be next in line. We interviewed the stunning singer and discussed the colossal single "Kings & Queens," developing her pop sound and more.

Ones to Watch: First off, Ava Max's mega-hit "Kings & Queens" reached No. 1 on U.S. Pop iTunes, #1 on the Billboard Adult Pop Charts and went platinum in 12 different countries. How were you able to become a part of the writing team for the single and what was that experience like?

Mimoza: I actually wrote that song in 2015. I never would’ve thought that 5 years later someone would take it. I’m so happy she did, as I always believed in that song. The Chorus always stood out to me. I’m not just proud of the fact that it did incredibly well, but the fact that I wrote for another Albanian artist is what makes me so proud.

In addition to writing for other artists, your solo music includes the passionate pop anthem "Love for Days" and the empowering "Young Queen." How did you develop such a powerful pop sound?

I took my time developing my sound. It was super important to me that it’s authentic & honest. I always write songs that come from real life experiences. I put so much passion & heart into my music. Both songs are unapologetically honest. "Love for Days" was my hopeful romantic love song & Young Queen is my love letter to Kosovo, my mother & myself.

Talking about "Young Queen," the track is a tribute to your mom and all the mothers who raised their daughters to see themselves as young queens. In what ways did your mother teach you this mindset and how has it helped you throughout your life?

I was raised by a strong mother who had incredible values. Everything I am is because of her. How I carry myself, how I walk through life with my head held high… - it’s all from her. It’s a big blessing to come from humble beginnings. It makes you work harder & appreciate everything so much more. My mom taught me to remember that on good & bad days.

The release is also an ode to your home country of Kosovo. Can you explain more about what life was like growing up there and also your move to Sweden?

I was born in Kosovo but raised in Sweden since my parents were refugees from Kosovo. They wanted to make sure they gave me & my siblings a better future, that’s why I grew up in Sweden. I had the most amazing childhood growing up in Sweden. But at home we always spoke Albanian & my mom would also cook Albanian food 90% of the time! I grew up with two different cultures at the same time.

On "Young Queen," your soulful vocals pair perfectly with the song's explosive percussion. How was the tune concocted sonically?

I had the concept & the title. And I knew I wanted to have a song that reminds me to not drop my crown. And that’s how "Young Queen" was written.

You have worked with notable producers such as Redone (Lady Gaga, J.LO, Jason Derulo) and Shea Taylor (Beyoncé). What have you learned from collaborating with such prominent players in the industry?

Both are incredibly talented and really humble people. They’ve both always treated me with so much kindness & respect. And I’ll always have that for them. I’ve learned that the kindest people in the industry are the most successful ones.

At just 17, you showcased your flair for writing on a record that went No. 1 in Japan (“One in A Million” by Yamashita Tomohisha) and penned the Spanish hit “Who’s Loving You” by Auryn ft Anastacia.  What advice do you have for other young songwriters just starting their career?

My advice would be to live by your own rules & always trust your gut feeling.

You have achieved a lot as a pop artist, but have you ever tried experimenting with other genres?

Thank you, that’s very nice. But I feel like I’m just getting started.

Lastly, what can we expect going forward from Mimoza?

You can expect more unapologetically honest records that hopefully will be played years from now. I really care about my songs being timeless and hitting different. 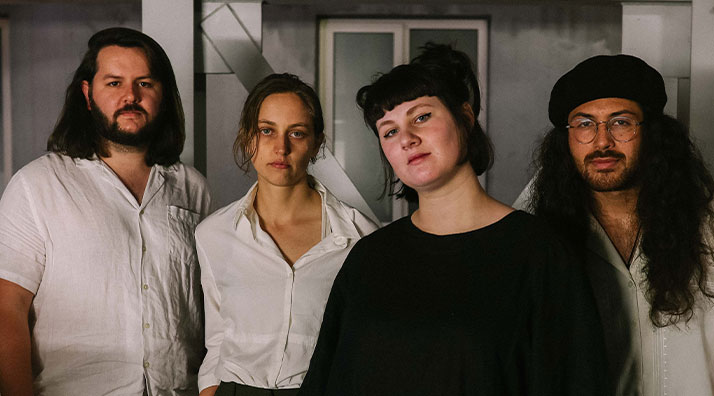 Meet Mousey, the singer-songwriter who defies the restriction of genre