Another season of Euphoria has come and gone, and people are still shocked by the dramatic events of season two. We saw the characters go through betrayal, growth, self-destruction; we even got an iconic dance number starring everyone’s favorite underappreciated boyfriend, Ethan. (Yes, I’m an Ethan stan. He deserved better.)

Anyway, this season’s soundtrack didn’t fail in acting as a carefully curated vehicle to move the story forward sonically. Below are our top ten favorite music moments of Euphoria Season 2.

The season opens with an unexpected flashback of Fez’s childhood. His gunslinging grandmother marches into the strip club and shoots Fez’s father in the pelvis. When she walks back to the car, the line, “Baby, it’s just you I’m thinkin’ of,” plays on the radio as she tells a bruised and battered Fez that he’s going to live with her now, away from his cruel and abusive father, and kicking off the fate that is to befall our favorite, loveable drug dealer.

In the first episode, Nate drives Cassie to the New Year’s Eve party. Unfortunately, he speeds up to 100mph, and as a result, she spills her drink all over herself. Nevertheless, the tension between them builds, leading to them getting together behind Maddy’s back. “Dead Of Night” is about a whirlwind romance that ultimately ends in tragedy, foreshadowing what’s to come.

Gerry Rafferty -  "Right Down the Line"

The song, which was featured in the official trailer, makes two distinct appearances this season. In episode one, the song plays when Rue and Fez are told to strip by Laurie and company. In episode two, it plays when Rue ditches dinner with Jules to do drugs with Elliot. “Right Down The Line” is a mellow and vulnerable song that describes how Gerry feels about his lover. Gerry suffered from alcoholism for most of his life, and in the song, he praises his lover for helping him through the dark times in his life, saying she is the only one he can “lean on.”

While in a somewhat comatose state, Nate fantasizes about Cassie and the life they could have together. The montage includes scenes of a pregnant Cassie and her subsequently giving birth. Given that this song is sung by a couple that didn’t last, it only foreshadows just how doomed this toxic relationship is from the start.

After their high school graduation, Cal and Derek seek shelter from a storm in a gay bar. After a fair share of drinks, the two best friends dance with each other, culminating in them giving into their repressed desires and ultimately kissing. But unfortunately, this is Euphoria and lovers do get torn apart once Cal finds out that his girlfriend and future wife, Marsha, is pregnant.

While high, as per usual, Rue lip-syncs and dances around her house with a pillow to the appropriately named song, making a mess in the process.

In episode six, Fez and Lexi watch the '80s classic Stand By Me and sing along to the song. Lexi later talks about the play that she’s poured her heart and soul into, lamenting over everything she couldn’t say to everyone’s faces and wonders if it may do more harm than good. Fez reassures her that no one will have a problem if the stage production is anything like the movie.

Bonnie Tyler -  "Holding Out For A Hero"

It only makes sense that Lexi incorporated this '80s hit into her play. Kat’s ex-boyfriend Ethan, who single-handedly played most of the characters in the play, lip-synced his heart out to this hilarious and entertaining homoerotic dance number, earning himself a standing ovation for his performance. Ethan proves what we knew all along; he truly is a hero.

The touching scene shows Elliot apologizing to Rue for worsening her addiction issues and betraying her by telling Jules and Rue’s mom Leslie that she had been using. As part of this apology, he sings a song he’s "still working on” for her, accompanying himself on guitar. It's a tender, heartbreaking send-off to a friend.

This grand, church-inspired song is ethereal yet grounded. In episode four, a high and emotionally and mentally exhausted Rue is caught in a surrealistic memory of her late father and walks through church doors, passing by an entire congregation. At the front of the imaginary church stands Labrinth himself, singing “I’m Tired,” a song he co-wrote with Zendaya and Levinson. The singer then transforms into her father, and she cries and apologizes for not being a good person. In the finale, Rue shares in the closing narration that she stayed clean the rest of the school year and wants to continue working towards being a good person. 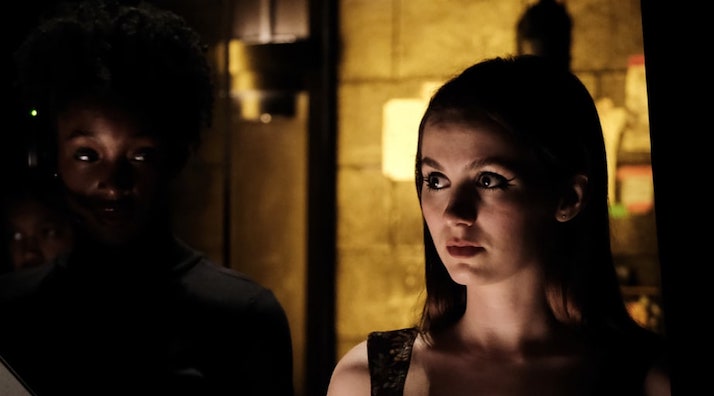