Musicians are storytellers. Sometimes a song tells a story that takes a lifetime to decode due to its extensive poetic nature, and sometimes a song dances to a more succinct tune and the story is easily identifiable. Regardless, music is an act of storytelling, and the Toronto-born-and-raised pop artist RALPH has her fair share of stories to tell.

The lively singer-songwriter began creating and performing in 2015, utilizing her lifelong passion for singing and writing. Today sees RALPH releasing her iridescent EP, Flashbacks & Fantasies alongside a brilliantly creative music video for the fifth song on the project, “Looking for You.” RALPH spoke on the concept of the music video, sharing,

“One night after some wine, my dear friend Matt brainstormed a music video concept - a lead character who keeps catching brief glimpses of this recurring person, but every time they try to see their face, the stranger is obstructed by something then disappears. When I reached out to Rosanna Peng, a talented Toronto/LA director I admire, I floated this idea for the 'Looking For You' video…and she was totally down. Her videos are so unique and aesthetically driven that I knew she could nail it. After adding our own personal quirks and trademarks, we managed to create a visual story that we feel encompasses the feeling of the song perfectly. The dreamy bedroom scenes (my own bedroom!) connect to the honest, intimate lyrics, while the colourful styling and character intros keep the video light and fun. It's not about desperation or needing someone to fulfill you, it's about excitement and the myth of ‘love at first sight.’”

RALPH’s warming voice perfectly accompanies her  mashup of silky R&B and '90s pop nostalgia for a smooth and pleasurable sonic experience that takes us through glimpses of a story written by, directed by, and starring herself.

Ones to Watch caught up with the Canadian musician to grab a couple of the tracks that inspired the making of her latest EP,  Flashbacks & Fantasies,  and we’re more than ecstatic to share the inner-makings of RALPH’s mind with all of you.

This has been one of my favorite Ariana songs since it came out in 2016. There's something about it that makes me feel emotional - sad, but happy and hopeful at the same time. I have really intense memories of running to it during a brutal breakup, and I would sort of cry and smile at the same time while running very fast. I've wanted to create a soaring pop song similar to this for a while, something that feels cinematic and anthemic and beautiful. Something people can cry and run to! "Looking for You" was definitely inspired by this idea.

I went through a phase during my EP writing period where I started examining radio hits as mathematical equations and really honed in on this Dua track because it was EVERYWHERE. I basically tried to decipher how and why it did so well. What made it so danceable and appealing? I was having brunch with my family one morning and my brother was like, "It's kind of like Kiesza's hit 'Hideaway'…it's got a repetitive house-y dance rhythm and uncomplicated lyrics." I went into the studio that day with a plan - create a house-y piano jam that doesn't falter and pick a simple, sexy concept. BOOM. "Gravity" was born.

I've always been a big jazz girl, "At Last" was one of the first songs I ever performed at 11 and I studied vocal jazz in high school. BUT this song has always stood out to me because it's so relatable. Wanting to be someone's Sunday girl, and not just their Saturday night hookup. Wanting the long mornings in bed together and not the cold, awkward Sunday morning walk home. I wanted to create a song that FELT warm and cozy, something that felt sunny and sexy and reflected how those lazy Sunday mornings could feel with someone you really liked.

I've been super obsessed with this podcast called Song Exploder and  I really loved the Lorde episode where she talks about writing "Sober." It was so inspirational to me and challenged me to take more risks with my production ideas and vocal treatment and rhythm. I loved the idea of starting songs with dry, upfront vocals,  it made the lyrics feel so intimate and honest. I also just love that Lorde isn't afraid to be weird, it pushed me to experiment more. I mean hell, girl has won Grammys for weird. WEIRD IS GREAT.

Miley Cyrus, Mike WiLL Made-It - "Party Up The Street"

Honestly, I love Miley and I loved this EP. She's such a fascinating chameleon. Each song was so different and special, I think I unconsciously noted that and used it as inspiration for my own EP. If each track is well executed and has a strong presence and story, people will listen. "Party Up The Street" was my summer jam, it's such a wacky song and is kind of a slow burn, which I thought was fun. Mother's Daughter felt powerful and inspired me to infuse subtle political messages into my writing. 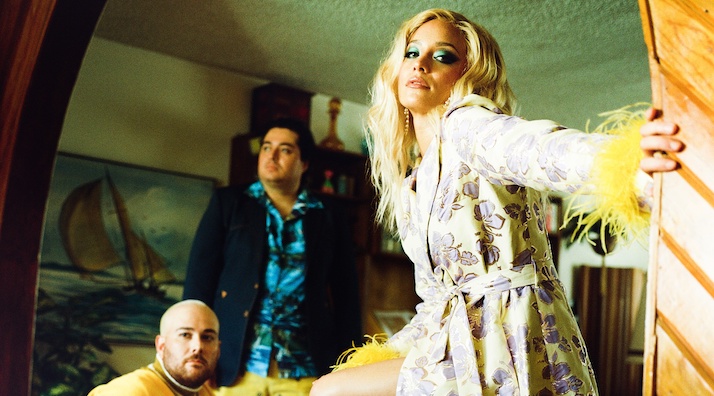 March 26, 2021 We caught up with Dog Trainer to talk about how they found their voice and the highs and lows of creating an album during a pandemic.
Author: Ally Rincón
Indie
Pop
Scrolling to feel better...part one
Dog Trainer

@onestowatch · 8h
Our Now Watching Playlist is fully updated to fulfill all your new music needs. 🫶 This week we have the ever so tal… twitter.com/i/web/status/1…
MORE ON TWITTER