22 Rising Artists on the First Record They Ever Bought

Crinkly reverbs, satisfying vibrations, and blissful tenderness are all essential to the intoxicating experience of playing a vinyl record. Even just watching the spiral groove spin around the needle is utterly gratifying, and it's a tradition we here at Ones To Watch think should be kept alive.

In honor of Record Store Day, we asked 22 rising artists to tell us about the first record they ever bought and their answers are definitely taking us back to the days when vinyl was the talk of the town. Keep reading for responses from FINNEAS, grandson, Olivia O'Brien, and many more!

"It was either John Mayer's 'Continuum'  or Carole King's 'Tapestry.' Both those albums feel like coming home."

"First Fridays before the album dropped, they put out a bunch of songs leading up to the album."

“The first album I bought was a Lenny Kravitz' greatest hits album. I remember listening to it on repeat and loving the sax solo on the record 'Let Love Rule.' The melodic and chordal structure around this song felt perfect as well.”

"It is still one of my all time favorite albums and was a massive part of my childhood."

"Going to my first public school. Wearing uniform (dark blue dickies, white button up). The little homie was selling bootleg CDs with legitimate printed covers. I still wasn't allowed to listen to rap, so this was my chance to gain entry to hip hop. I copped it, threw it on my CD player, and I remember hearing the phrase, 'The royal penis is clean, your highness,' and started dying laughing."

"The first record I bought... was TLC's 'CrazySexyCool' on TAPE! I remember feeling so cool that I owned my own music and that it was not my parents' music! My cousin came over not long after I'd gotten it and we drew "crazy sexy cool" on our underwear, sagged our jeans, and danced in front of the mirror to the whole album front to back."

"First vinyl I ever bought was 'Coming Home'  by Leon Bridges. To me, that album sounds like it was made to be played on vinyl."

"I found a used copy of James Taylor's first album, 'Sweet Baby James,' in Amoeba on Sunset Boulevard. I had just moved to Los Angeles and was getting into sampling old records so I bought myself a terrible Crosley record player with a janky built-in speaker and started digging. I grew up with James Taylor and older folk music around me, so it connected me to home and to my father in some way. I had been digging for old soul and jazz records for a while and finding that record reminded me why I'm doing this in the first place. Connection, family."

"The first album I ever bought was Coldplay's 'Parachutes.' I remember my older brother driving me to the record store to get it after I had expressed a strong liking to 'Yellow.' I have distinct memories of my brother and I blasting that song anytime it came on the radio when we were in the car. I remember thinking that Chris Martin was an actual God after listening to the album a few weeks after buying it. Even at a young age (I think I was eight or nine at the time), there was something mesmerizing about his lyrics and the piano lines on that album. Favorite tracks include 'Shiver,' 'Sparks,' and 'Don't Panic.'"

"The first record I ever bought was 'OK Computer'  by Radiohead–which I still believe, to this day, is one of the best albums ever made. I have so many memories of putting it on and just sitting and taking it all in. No other distractions, no phones, eyes closed, wondering how they made everything sound like it did."

Jasmine Thompson - The Ting Tings' We Started Nothing (LP 2008)

"The first record I ever bought was The Ting Tings' 'We Started Nothing.' I remember singing loudly to each song with my brother in a car for hours as we traveled from London to the Lake District. I knew all the lyrics!"

"The first record I ever bought was Sade's 'The Best of Sade.' My dad had been playing her music my entire childhood, and buying this particular record felt like a musical torch had been passed onto me. It marked the start of my own musical identity–with Sade's unmatched soulfulness being the foundation."

"The first record I purchased was Ashanti's self-titled. 'Ashanti...'  my strongest memory is that I was only five years old and I asked my mom and dad for it. We purchased the album in cassette form and a Walkman. And that became the background music of my little pre-K life and on... (I loved Ashanti and JaRule. Lowkey, I still do.) When I think about it, I miss the feeling of anticipating a record you really want and having to wait to get it, the pleasure you feel at the counter paying for the music of the artist you support, excitedly unwrapping the packaging popping it in and pressing play!"

"I remember playing it in this white bulky CD player that my mom gave me... I had drawn all over it with Sharpie and colored the speakers with green and pink highlighter markers. I would sit in my room and play it over and over."

"My first album that I ever bought with my own money for my eighth birthday was *NSYNC's 'No Strings Attached.'  I remember buying it with a couple other albums at the time because my dad wanted me to pick some music for my birthday party, but that was definitely the first one I went for and in 2019, I gotta say it still slaps stupidly. I actually just heard Ariana Grande sample one of their songs on the radio the other day." - Elijah Rawk

"No particular memories come to mind - other than my mom loving it and buying it for me."

"I honestly don't remember if I've ever bought a record in my life, but I used to go through my brother's car and steal shit when he wasn't home. And I remember the first CD I ever had was 'Life After Death' because I took it from his car. I think hearing that album at such a young age made me hit puberty instantly and I became a big boy. I learned all my bad words that day."

"The only story I can offer is actually based on a CD that I bought at Tower Records, so not technically a record itself. When I was young, for my fourth or fifth birthday I was given a small Walkman-style blue CD player. My mom had tons of CDs so The Beatles and Paul Simon were covered. The first record I remember picking out and buying was Aaron Carter's 'Aaron's Party' purely off of seeing ads for it on TV. This was the first pop record I ever bought and I listened to it pretty religiously. I took out the inside insert and unfolded it and hung it on my wall as a makeshift poster–a habit I'd continue well into being a teenager. In a strange way, I think buying that record and wanting to listen through all of it because I had bought the whole album inspired a persevering kind of attachment to appreciating albums as whole pieces of work." - Benji Cormack

"*NSYNC - 'No Strings Attached.' Was my first concert. And it changed my life." - Max Becker

"First vinyl I got was Stevie Wonder's 'Songs in the Key of Life!' I found it at the thrift store and bought it before I even had a record player because I knew future Umi would be happy to have it. Now I have a record player and it's one of my favorite records to play in the morning."

"The first record I bought was 'Late Registration,'  and I'm 100% sure that every single time I cried in high school I listened to that album. It was the soundtrack to all my happy and sad moments, and still is."

"My first album was 'Dookie' by Green Day. And it changed my life. The first song I learned with my middle school band was 'When I Come Around,' and I learned to play drums listening to Tré Cool." 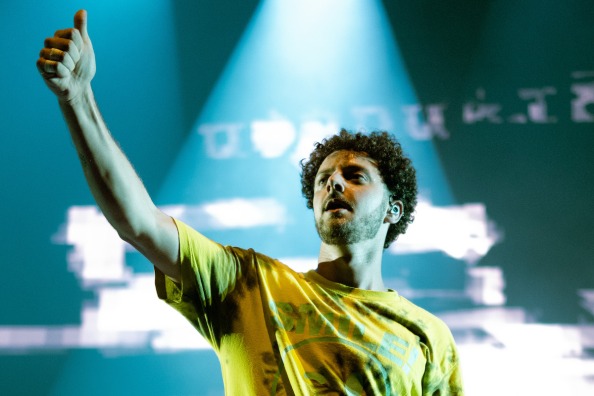 Q&A: grandson on Exploring New Territory with Recent Bring Me The Horizon Tour & More | The Noise

October 19, 2022 Known for his strong lyricism and unpredictable performances, grandson has proved he can keep up with just about anybody as he has toured with artists such as alt-rock icons The Smashing Pumpkins, pop-punk queen Avril Lavigne, and nu-metal trailblazers Deftones.
Author: Moe Horta
interview
grandson
the noise
alt rock